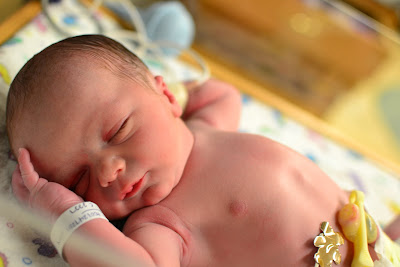 Everybody did their thing to finish up, Aaron took lots of pictures, and I waited for them to bring him over to me. After Aaron and Jack headed to the nursery (after I saw him of course), Dr. Cutler told me that they tested the gasses in his cord and he was low on oxygen. His cord was also loosly around his neck. She said the decision to deliver was definitely the right one and that it was not because of the fender bender. I felt relieved.
But then I thought about the miracle that had just occurred. I know with 100% of my heart that had I not had that fender bender, I would not have known I was contracting every 2-3 minutes, and most importantly, I would not have found out that Jack's heart rate was dropping with every few that passed. I'd be spending my time this evening not writing this blog post, but doing something else, still pregnant and waiting for Monday, the 26th. My old pediatrician later told me that the situation Jack was in, if undetected, could have resulted in still birth. Wow. I know for a fact that Jack came into this world with God looking out for him. It makes me hopeful for his future. I know God will continue to watch over him (and his brothers) forever. My family has been truly blessed and I am in love with my family of five. 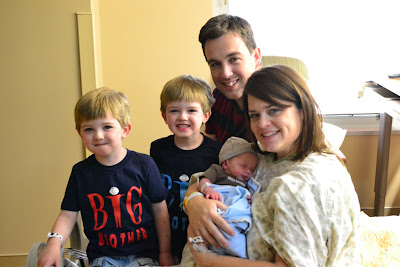