It Goes Both Ways!

So this has got to be the best sibling moment so far since Jack has arrived!

First, just in case you forgot (ha!), let me say that Owen and Mason LOVE to try to get Jack to smile or laugh.  Smiles come easy, while laughing has proven a little more difficult for them to draw out of him.  Jack loves to be tickled, but O and M don't quite have the *right* tough to make it tickle - instead I think it must feel like poking.  Usually I'm right there "helping" Jack laugh and giving the credit to the boys.  Makes 'em feel good. :)

Anyway, back to the other night...best sibling moment yet!  Finally the relationship between the big boys and Jack is really starting to go both ways!  Just watch the video!

This is one little boy who is excited to be getting bigger and better at doing things. I can tell he wants to get moving so he can keep up with his big brothers.   Well, now he's one step closer!

Jack is rolling both ways now and he's very happy about it!  This past week he had been getting his hips and shoulders flipped over but he couldn't quite figure out how to lift his big baby noggin off the ground and un-pin his arm.  He had one successful roll but it was kind of a "cheat" since his bottom arm was down by his side before he started.  Then he did it once again for Granna on Thursday.

Finally on Saturday it clicked.  And now just one day later, he's doing it with ease.  In fact, bedtime on Saturday was kind of tricky because of his new-found skill.  His instinct was to roll over, which led to his other instinct - mini push ups for tummy time.  Not super fun when you're an exhausted baby.  He got pretty mad so I had to stay by the crib for a few minutes and keep him from rolling while he relaxed enough to fall asleep.

Here's Mimi trying to entice Jack to roll with one of Owen's cars. 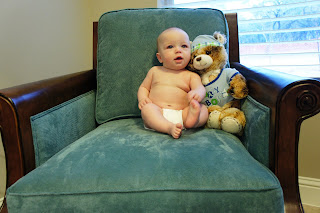 Oh boy has Jack gotten FUN!  It seems like every day he does something else cuter than the day before!  It makes every day so much fun for the rest of us - and a bit hard to get anything done because we'd all rather sit and play with Jack.  The big boys still can't get enough of him and often argue over who gets the seat in the car that has the view of Jack.  It's a nice problem to have! :) 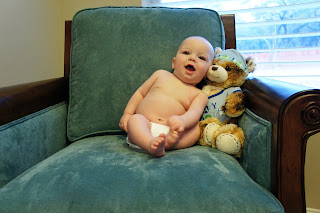 We have been keeping a running list of the cute and funny things the kids have been saying lately.  The problem is, we never knew when to post the list since they were constantly saying funny things that we wanted to remember.  Finally, Aaron made a separate page on our blog where we can keep the list going.  So make sure to check the "Funny Quotes" page often!  You can find the link at the top of this page just under the heading.
Posted by Erin and Aaron at 11:15 PM 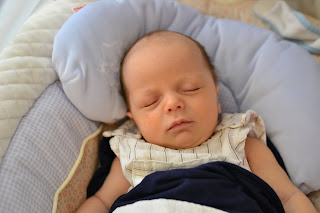 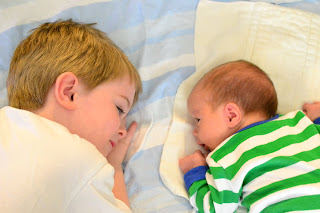 The Return of the Jumperoo!

Owen and Mason LOVED this thing!  We pulled it out of the attic, gave it a good cleaning, and let Jack go to town.  He was a little slow going at first as he tried to figure out what he was to do, but I think we put him in quite a bit earlier than we did with Owen and Mason (they were closer to 6 months - Jack is a few days shy of 4 months.  Boy does the song bring back memories!

Little jumping feet trying to get the hang of it.