LITTLE SCIENTISTS
water + air = funny noises
A (long)while back, Aaron had shown them how to catch bubbles under their cup in the bathtub. The other day, they busted out with this little experiment and I was amazed they remembered it.


OWEN'S LITTLE SOLO
Here's Owen taking it on his own. So priceless!


BOOTS
One night, the kids requested the "Boots" song and wanted to put on their boots, which turned into the "Catch Ya" song and running around the coffee table. They're shirtless because they were on the way to the bathtub when we got side tracked. Owen is still stomping/running around in his boots (we're on the 3rd round of this song) when Mason decided to do a little dance lesson with Mommy. He's never done this before and I was cracking up! As I watch the video back, I crack up even more at Owen in the background. I just love this video!!

Here are the pictures we took this weekend of Owen and Mason's cousin Kate's first birthday party! The theme was so cute and all the little girls had home made fairy wings and tutus to wear. Of course, the main focus of this album is the birthday girl, Kathryn Elise! Happy Birthday little fairy princess...

After Aaron's Mexico trip was over, the four of us headed to Port Aransas for a little vacation! Aside from the West Virginia work trip last fall, the four of us haven't taken a vacation by ourselves. We always try to include whichever grandparents can make it, so this was a treat...no offense, grandparents! :) We weren't sure how the trip would go since, up to this point, Owen and Mason have HATED sand. We decided that we were just going to make them like it. And they LOVED it! The first day on the beach, their favorite activity was getting their feet covered in sand and then washing it off in the water. My kids don't like being dirty, can you tell? We went for pizza that night and the kids passed right out at bed time.
After a suggestion from a friend, we got the kids some nets so we could try to catch little critters along the shoreline. We did catch a tiny hermit crab and some other shell-less crabs that were super tiny and the kids could have cared less about. What they did love were the tiny little clams that live by the thousands under the sand. We dug them up, put them in the net to rinse the sand off, and dumped them back out. Owen and Mason thought it was the coolest thing to watch them all wiggle back under the sand. If you ask them what they saw at the beach they'll tell you they saw shells under the sand that wiggle, and they give a little wiggle with their body. It's so cute! Later this night we went to the "pirate restaurant" which was dubbed that because it had a jolly roger painted on the side of the building. Of course, the kids thought it was awesome. Afterward, we went to a little ice cream shop for dessert and then strolled around to all the token beach souvenir shops. It was a fun, relaxing day!
The last day we were there we went for an early swim before checkout. Then we ate some lunch and rented this cool little car that the kids called their "gig 'em tractor." We drove around the island, saw some pelicans on the bay side, stopped for sno-cones, drove down the beach a while, and then headed back. Now the plan was to head to Austin for the night, wake up, and hit Sea World with Granna (Granddaddy had to work all weekend, but have no fear...Friday, August 21st is his last day of work EVER). Busy vacation!
Owen and Mason loved Sea World a lot more this year! We got to go backstage at the Viva show because my sister's friend is a cast member. We saw some super cute and super noisy Beluga whales up close. Last year the kids couldn't have cared less about Shamu, but this year they thought it was pretty neat and really wanted to take home a giant, stuffed Shamu. Since a giant, stuffed Shamu is the LAST thing I need to add to my house, I told them no. Sorry kids. You'll have to make due with the plastic figurine of Shamu you got last year. They got over it as soon as we left the store. Phew!
Overall, it was a great family vacation for us! I just wish we had more vacation time so we could do things like this more often!

Fishing for REAL this time

The day after the boys very first fishing adventure (with no bites) we decided to head out to the lake for the evening. The marina is always swarming with hungry fish so we thought we may have better luck...and we did! Boy were Owen and Mason amazed at the wiggly fish! Owen mustered up the courage to touch the perch. He squealed and said "it's coooold." After fishing, we had a little picnic and headed out for an evening ride around the lake.

Here are some pictures from our July 4th outing that we finally got off of Mimi's camera...

Owen's old smile is BACK!

We went today for Owen's new tooth. The fit is great, the color match is great, it's hard to tell there's even a fake one! Most of all, Owen did great! He didn't like being very tightly pinned down with velcro and then wrapped up and pinned some more. I can't blame him though, most adults hate MRI's and this was tighter than that! After all that, the sweet boy still thought about his brother (who was staying at the neighbor's house) when digging in the treasure box. He picked out a red ball for himself, and a blue one for Mason. When we opened the door to pick up Mason, Owen sprinted inside and nearly tackled Mason trying to give him his ball. Such a sweet boy. We're so proud of him! 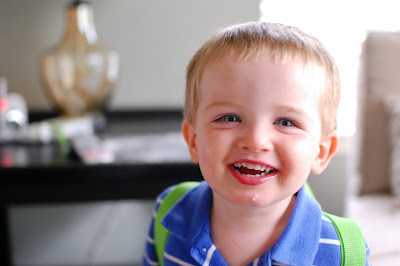 Today was Owen and Mason's first time to go fishing. We tried to actually catch some fish but the place we went was buzzing with swimmers and jet skiers. Owen and Mason didn't exactly understand to hold the pole still while we were waiting for a bite and it was making us a bit nervous. We decided to take the hook off and attach the practice fish instead. They thought it was super fun to cast it out and reel it in, over and over again. They were content with the fake fish that the "caught." Here are some cute pictures we got today. Aaron isn't with us this trip because he's in Mexico for his cousin's wedding. We'll go fishing again soon though!