Wow! I've been meaning to write a post about all the cool things Owen and Mason can do but it seems like I always find something else to do instead. We're coming up on 2 years old in just two short weeks...I can't believe it! Here are the accomplishments over the last couple of months...

Owen and Mason can:
-recognize all letters of the alphabet except G, V, Y and Z. They still love to turn the J upside down and shout CANDY CANE! I used to teach 4 year olds and the goal was for them to exit PreK knowing 10 letters. Most did, of course, but there were still some who were clueless. So for my kids to turn up knowing 22 of them before 2 is amazing to me!
-tell you all the colors and even sort objects by color.
-count to ten...one, two, free, four, fi, sis, seben, aaa, nine, TEN!
-sing the ABC song...they love to accentuate the "next time won't you sing with MEEEEE! YAY!"..and then they clap for themselves.
-speak in 3 to 4 word sentences. some favorites are "I'll do it." "Mommy hold it." "(Someone's name), where are you?" "I hear 'em" (referring to the dog barking or Granna whistling while playing hide-and-seek). "Take a baff." "Get up" when they want you to get up and go somewhere with them. "Hold you" when they want to be picked up. "Shut the door"...Mason's little voice as he says it is so cute. It comes out as "Shucka door." "Open it" has been shortened to 'Ope nit.' They'll even attempt the hard words with pretty good accuracy...'umbella' 'ocotus' and band-aid has been reversed to 'am baid.' They both understand the meaning of yes and no, big and little. Owen loves the little version of his big blankie. He calls it little but pronounces it 'iggle' and it is so darn cute. The other day Daddy was doing yard work and the kids came outside as he was finishing up. Owen saw the pruning clippers, squatted down, picked them up, and said "wow! woooow!!" I guess he knows the meaning of that too. He sure was impressed!

They are getting better at sharing and taking turns. Poor kids are forced to share everything being twins. They are very possessive of THEIR milk cup though. Owen's is blue and Mason's is green...and don't you forget it! But most other times I hear them letting the other one know when it's his turn for something. Owen will tell Mason "Owen's turn" and vice versa. They are so sweet towards each other too. If one is crying the other will bring him his blankie and/or pacifier. Ugh! Speaking of pacifiers...we're about to ditch 'em but just can't bite the bullet and do it!

The amazing thing to me is their vocabulary. Apparently, by two years old kids are expected to have something like a 50 word vocabulary. I know they have at least 200 words by now and they pick up a new word for something by just hearing it once. The other day I realized they knew the word starfish and even knew which object was the star and which was the starfish when we were playing our color sorting game.

Right now they are crazy about pirates, soccer, and surfing. They love to walk around singing..."A pirate, a pirate, a pirate says AARGH!" and "treasure, treasure, where's the treasure" while pretending to dig up the carpet with a shovel. They also love throwing or kicking a soccer ball and yelling "SOCCER!" Another favorite thing they do is pretend to surf while standing on a lid to those plastic bins. They say "surf's up, hooooo daddy" and then they fall down and say "wipeout!" The get all these ideas from a few different Backyardigans episodes. I know people say TV is bad for kids but so far, in our case, it has really helped their imagination when they are just in their room playing.

Bath time is also crazy around here. Naked babies egging each other on is so funny. In the tub they love to pretend to go night-night. They lay back in the water and make the snoring noises. Lately Mason has discovered that it is fun to flip over onto his tummy with his face still in the water and then pop up really quickly. He used to be freaked out by this. I am hopeful that this is a good sign for a fun summer of swimming and less clinging while in the water. After bath they turn things up a notch by wanting to flop around in their diaper on our bed. (We lay them on our bed right after bath to dry off and put on PJs)...so much so that we are getting them an inflatable bouncer for their birthday. The darn bed is just too scary for mom and dad to let them flop around on. Someone's gonna break a neck!

Granna taught them how to play hide and seek. She hides and they seek. One of the times she hid on the other side of our bed. The kids were having trouble finding her so I coaxed them into my room. They followed my into the bathroom and looked in the closet. Mason said, "noooo" when he didn't see her. Then they were both standing there in thought wondering where she could be. Owen was looking straight at her but I guess didn't realize it at first. His serious face turned into a giant grin as he spotted her and then he yelled "YA!" It was so darn cute! He ran over and gave her a big hug, pulled her hand to get her up, and demanded "again, again!"

We're gearing up for potty training, swimming lessons, toddler gym, and Mother's Day Out (in the fall).

These kids are just amazing and I have no idea what I did with myself before May 10, 2007. If you ever spend just 5 minutes with them you will see what we mean. They are true blessings and we just love these little boys!
Posted by Erin and Aaron at 1:04 AM

Well, a few weeks ago in the midst of a springtime drought for Austin, we made plans to head out to Lake Travis and see how well Owen and Mason enjoyed the boat this year. Well, yesterday it was not looking good, with tons of rain between Houston and Austin. Luckily for us, though, the weather cleared and we had a beautiful day on the lake almost to ourselves.

Owen and Mason had a great time. They are a lot easier to handle on the boat this year, and they got a kick out of seeing all the water and boats, as well as peeking over at the bubbles and waves in our wake. We parked the boat on a nearby beach and got out and dug for treasure. The kids still don't love the sand, but this time we were prepared with their new sandals. Everyone took a nap then we went back out and grilled some burgers and went for one last late-night cruise. All in all, a great day!

A few weeks ago, the four of us went to the zoo for the first time since last summer. Now that Owen and Mason are older, we expected them to really get a lot out of it. On the way there we started talking about all the animals we would see. Mommy made the brief mention of seeing an owl...and well, they latched onto that idea. Soooo, we went on an owl hunt as soon as we got there. Not until we saw the owls could we see the other, much more impressive animals. We decided to brave the day without the stroller since we knew they'd be in and out of it all day looking at animals. Owen and Mason did great but Mom and Dad were exhausted by the end of the day. Up, down, up, down, run this way, walk on that curb, fall down, cry, get over it, run some more...The funniest thing is that when they want you to pick them up they reach up and say 'hold you.' What they mean is 'hold me' but they got the 'you' part from us asking 'do you want me to hold you?' So cute. Here are some cute pics from our outing:

On another note, here are a handful of pictures Aaron took while messing around with his camera.

Granna, Granddaddy, Bee, and Numna came to visit us for Easter. We had lots of fun playing outside, dying eggs, opening Easter baskets, and hunting eggs. Here are some cute pics...

Well we downloaded a bunch of music from Owen and Mason's favorite shows and had a bit of a dance party tonight. Right know they are OBSESSED with anything pirate. Here's a video of some of the fun. The white plastic lids on the floor are their "surfboards" from singing "Surf's Up!" earlier.

Is this what little boys are made of?

So it seems that the last couple of days Owen and Mason have really cranked up their energy dial. Aaron was nice enough to watch them one evening while I went out and did some shopping. He called me while I was out to see if I had given them coffee, sugar, or let them play with lots of puppies. They were apparently bouncing off the walls and wouldn't stop. Some bouncing is normal, but never for as long as they were going at it. Of course, they feed off each other. What one doesn't think of, the other one does. Aaron said they would run into a room squealing, throw some toy (they do not have a history of being 'throwers') and turn around and run to the next room before the toy ever hit the floor. Like a good dad, he decided it was time for bath and was filling the tub while undressing the maniacs. He looked away for a split second to get Owen's shirt off and by the time he turned back to Mason, he was drenched from his head to his waist. I guess he leaned over the tub and under the running water. How he got his entire upper body wet in such a flash, we may never know. But Mason sure thought it was awesome. Here's proof: 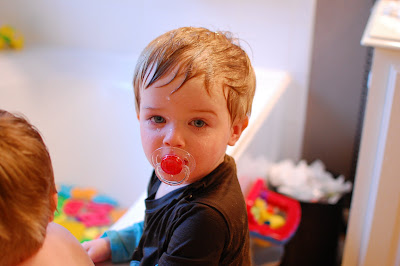