After a weekend away for our anniversary, we were recharged and refreshed and (finally) caught up on sleep. It was great to go into work early and get home in time to get some fun backyard play in while the sun was still up.

Right after New Year's, we took advantage of the long weekend to get away to Dallas. We got to see Uncle Kyle and Manda, and we went to the Ice exhibit at the Gaylord Texan hotel. Basically it's a bunch of rooms that are filled with huge ice sculptures. It's Christmas themed and we figured Owen and Mason would enjoy it, and they did. The only catch? They keep it a frigid 9 degrees in there. But hey, we don't get too much cold weather in Houston so we had a good time.

A few weeks ago, Owen woke up in the middle of the night crying. Nothing would calm him down - we tried rocking him, giving him a new pacifier, making sure he had his blanket, turning on the aquarium - everything that they might normally need. Finally, I figured out what he wanted: 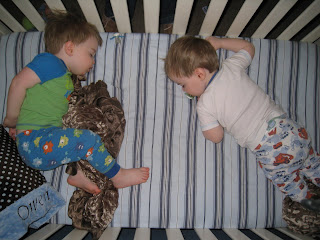 He just wanted to sleep over in Mason's crib. Sweet little guy.
Posted by Erin and Aaron at 12:21 PM

Owen and Mason go to sleep with this little aquarium that bubbles and plays music. If they wake up in the night, we stumble in and turn it back on for them...and it usually works. Well, the other night, Mason was having trouble staying asleep. He woke up crying and I went in and turned on the aquarium. It played it's nice little tune for the next 18 minutes and even lulled me back to sleep through the monitor. Not long after it stopped, I was awoken again by Mason's crying. In I went to turn on the aquarium. It worked for a while but not long after it stopped Mason started crying again. Ugh! I hesitated for a second because I was not looking forward to dragging myself out of bed again. Mason let out 2 cries and then on came the aquarium....and then no more crying. That little stinker stood up, reached from his crib to the dresser and turned the darn thing on himself. I was shocked! And of course I actually laughed out loud and had to wake up Aaron and tell him. What a cute boy I have!
Another funny thing that recently happened is one of those things that only happens with twins. And it is one of those things that people with twins 'say' happens but you never actually think you'll witness it. Well, mark my words. I saw it! The other day, Owen and Mason were both playing with one of those bead maze things like they have at doctor's offices...you know, the ones with the beads on a wire arranged like a roller coaster? Anyway, Owen was on one side, playing with the beads on the red wire. Mason was on the opposite side, playing with the ones on the blue wire. I took notice because they were actually both playing with the same toy with no arguing. In fact, there was not a peep out of either of them. Then...now here's the amazing part...at the EXACT same time with still no peep out of either of them, they both started scooting counter-clockwise until they got to the opposite side, where brother was sitting, and started playing with the beads on the new wire. I was amazed! I was thinking...'how did you both know to switch at the exact same time with no verbal cues?! Seriously?!' This is just one of those things that most of us will never, ever understand. How cool is that! I'm just so thankful to be their mom!
Posted by Erin at 12:02 AM
Newer Posts Older Posts Home
Subscribe to: Posts (Atom)