Owen was eager to write his teachers' names (Ms. Lori and Ms. Azra) on the envelopes of their end-of-year cards! Poor Mason was done writing after he got finished with his name on the inside of each card. I was very impressed with both of them, to say the least. I could see them thinking about each letter and then figuring out how to get that image on paper. For the most part, they were very confident in which way they were to move their crayon to form the letter. Owen was VERY sure of how to make the "Z" of all things! 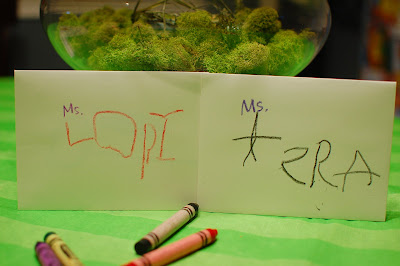 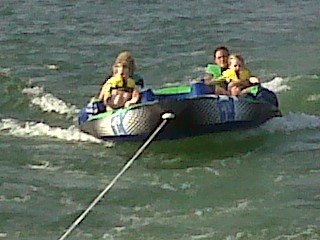 They were perfectly content and would have stayed there for hours if we let them. Mason was most definitely dozing off because he was so relaxed. Yes, we were going pretty slow but they LOVED it!!
Posted by Erin and Aaron at 2:50 AM

We were pretty busy for a while and fell behind on blogging things from April(ish). We spent a day at a friend's farm for a BBQ, a day at the zoo with Cate, went to another friends awesome private backyard Chuck Allen Floyd concert, worked in the yard, went to the park, and were babysat for a long weekend by Granna and Granddaddy. Phew! Click below for more pictures.

Back in March, Owen and Mason had a little performance on a big stage! There were so many people that they were a bit confused but they got up there and weren't scared one bit! And they looked mighty cute to boot!


Mommy told them to watch Ms. Tran (because I just assumed she would be showing them the moves from the wings), however, that was not the case. They watched her (just like I said to do) and were totally thrown off because she wasn't dancing. I was a little disappointed that I didn't know there would be a "big kid" at the front of the stage showing the moves and therefore, couldn't prep my kids. Thankfully, Owen and Mason were more than excited to show off their moves once we got back home.

Owen and Mason's real birthday fell on a Monday, a work day (for Daddy), and a school day for the birthday boys.  This was the first birthday (of many) that I was not with them the entire day.  I have to admit, it was a bit sad knowing that they are growing up so fast, that only a few short years ago they needed me for everything.  And here we are, three years later, sending them off the school to learn independence.  Sigh.  But, we made the most of it!  Of course, we woke up and opened one gift before school.  Then, Mommy and Daddy both surprised them at school for their little celebration.  In keeping with tradition, Mommy snapped a picture of them at their actual birth times, which happened to be right at the end of the school day.  We then waited for Daddy to come home from work so we could start the fun!

Being three, Owen and Mason had very specific plans for how they wanted to celebrate their actual birthday with Mom and Dad.  First, they wanted to play golf at the "golfing place" and then they wanted to go to Chuck E. Cheese.  Cate and her family were meeting us there and boy were they excited!  On the way, O and M told us they need four "golfing things" (clubs)..."one for Mason, one for Owen, one for Mommy, and one for Daddy."  I reminded them Cate was coming too and asked them again how many we would need.  There was a pause and you could see their little brains turning.  "FIVE!!!"  YES!  My smarties did addition in their heads!  I was proud, even if doing math in your head is a little nerdy!

We spent the next hour or so playing putt putt (okay, rolling the ball down the fun courses), and then headed over to Chuck E. Cheese for some pizza and games.  Somehow we ended up with a TON of tokens.  Owen, Mason, and Cate knew it too, and wouldn't let us leave without using every last one....sooo, us adults had to get in on the ticket-winning action.  We finally headed home for some cake, candles, the birthday song, and a few more presents.  My poor three year olds were exhausted by the end of the day but they had fun.  You only turn THREE once!  Live it up!

Mother's day this year came one day after the fun, yet exhausting, Rock N Roll 3rd birthday party!  The house was trashed, Jaxson ate some of Bella's meds, and people had to head back to their homes.  But, none of it mattered because we all enjoyed spending the day together anyway!  We celebrated with Mimi the night before since they had a long drive and headed out early Sunday.  We celebrated with Mommy, Granna, Numna, and Bee for dinner that evening.  Owen and Mason made me some lovely bookmarks and cards at school, as well as a cute flower pot with their hand prints on them.  They were SO excited for me to open their gifts!  I am so blessed to have been a mother for THREE years now.  I couldn't ask for anything better than these two awesomely precious boys that call me Mommy! 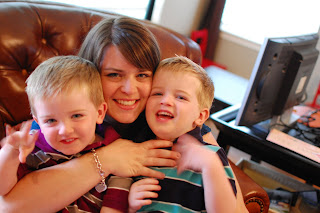 Posted by Erin and Aaron at 1:57 AM
Newer Posts Older Posts Home
Subscribe to: Posts (Atom)