This is what we do

One of the most precious sights a mommy can see: 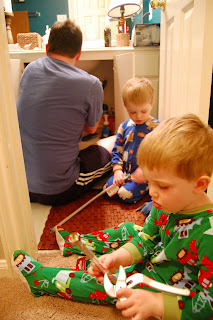 Two sweet little boys who hunted down their pretend tools so they could join their daddy in fixing the sink.  (Owen in green)

And something else to make a mommy proud - recognizing all their numbers in order to line up all the peg boards in reverse order from 10, so they could count down and yell BLAST OFF!! 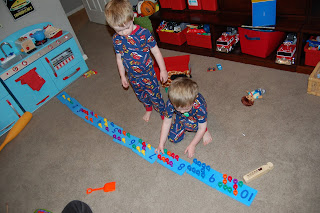 The other night we got home from HEB and all three of the boys in this house were in a very silly mood, instigated by Daddy.  It started with a "magic trick" where the kids would count to 3 and snap their fingers and the light would turn on (or off).  They thought it was amazing that they could snap their fingers and control the light!  They eventually figured out that Daddy was flipping the switch, which then led to them wanting to flip the switch.  So during each "off" period, Aaron would pose in a different way for the next time the light turned on.  Of course the kids thought this was hilarious and the flickers got more rapid, which led to a very funny evening.  Here are just a few seconds of our fun that took precedence over unpacking the groceries:

I also mentioned in a previous post how the kids love music, singing, and dancing, and I even posted a picture of the kids hanging out with Daddy in the playroom having a mini jam session.  Well, I found a video that was on a different camera that is just adorable.  Mason on guitar, Owen on vocals (although he isn't quite sure of the words yet), and Daddy on maracas!

The guitars you see them playing are fairly new to them and they each play some different songs.  Owen is still trying to learn the words to "What I Like About You."  In the mean time, I got some pretty cute video, including the "yowwwww!!"

They were recently introduced to a new song: Kiss' Rock and Roll All Night.  Evidently they had part of the chorus stuck in their heads.  Almost as funny as seeking out their guitars and spontaneously bursting into song, are their outfits - a t-shirt, undies, and some house shoes from Holland shaped like clogs.  Nothing screams rocker like red and blue elf shoes!  And be sure to listen to Owen towards the end.  I think he takes it up an octave! 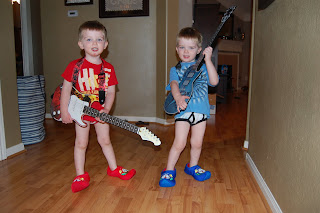 And here's a video of another nightly show.  This time to "I Gotta Feeling."