This year was the first time Owen and Mason picked out their own costumes for Halloween.  I couldn't imagine what they would choose and as they flipped through catalogs, kept changing their minds.  I wondered how we'd ever settle on one that they'd be happy with in 2 hours!  We were out one day and I saw a costume for a pit crew guy.  They are really into the movie "Cars" and when I explained the costume to them, they were sold.  I was worried that Owen would later wish his costume were red so I tried to convince him that the red "motorcycle/bmx rider" costume might be a good choice.  It looked very similar to the pit crew suit (all one piece and quite shiny).  My everything-red-all-the-time child immediately put down the red motorcycle suit and went for the blue one.  And THAT is how I knew they were for real about these costumes! 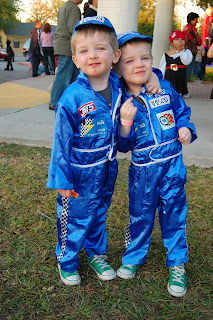 (Owen, Mason)
Of course leading up to Halloween there were several fun activities going on!  The kids had a party at school and were allowed to wear their costumes, which they were VERY excited about! 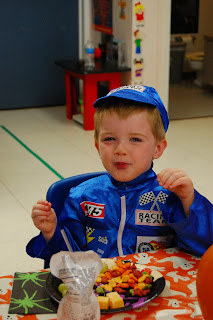 And here's Owen showing off his little craft project.  They are getting pretty good at placing objects in the correct places. 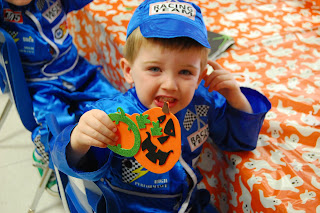 We also went to the Halloween carnival at the school where I used to teach.  The kids had so much fun winning candy! 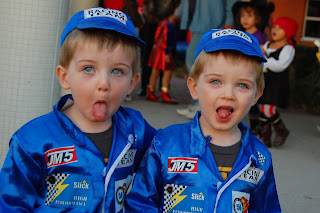 (Owen, Mason)
On Halloween we hung around the house and did some fun activities.  We made some rice krispie treats with Halloween sprinkles, carved jack-o-lanterns with specific instructions on how the faces should look from the kids, painted pumpkins, and trick or treated!

(Scary faces: Mason, Owen)
Click below for the album of Halloween day pics.  There are too many cute ones to post them individually!  Enjoy!
Here are the kids telling us all about Halloween.

After trick or treating and bath, the kids gave us a pretty funny little puppet show (that they didn't realize we were watching).  I debated if I should post this video because it's about 3 minutes long.  But because it needs to be documented just exactly how they are at this age, this is a perfect example of how much fun they have playing together.  And besides, I know some grandparents and other friends who will enjoy hearing their little conversation.

In the previous video, you probably noticed the stuffed Halloween kitty that Mason named "Mister Majesty."  We have no idea where he got the name, so here he is trying to explain it to us...quite funny!

And if that wasn't enough activity for the day, after all of that the kids decided it was time to dress up like pirates. Here is a cute video of them (mostly Owen) trying to convince us why they should stay up.