Day two of our vacation was spent at the Polynesian Cultural Center.  Now, I have to say I was a bit skeptical on how much fun could actually be had at a "museum" when the rest of the island of Oahu was just outside it's doors!  Well, museum it's not and I was proven wrong!

The PCC, as they refer to it in Oahu, is made up of villages that represent the main islands of Polynesia: Hawaii, Tonga, Fiji, Samoa, Tahiti, and Aotearoa (New Zealand).  Everything was very hands-on and the kids really enjoyed themselves.  There were several street shows with the traditional dances and clothing from each island, which was quite entertaining. Here is just a taste of it.

The kids had a passport take to each village and collect stamps to show they visited.  They thought this was really awesome! 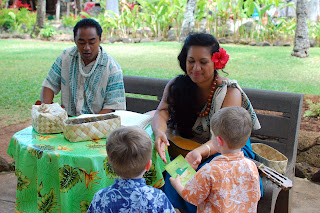 Some of us learned a hula dance in the Hawaiian village.


We got to weave some art from leaves, which ended up being a game.  (Pull the fish to the bottom of the twig and sling). 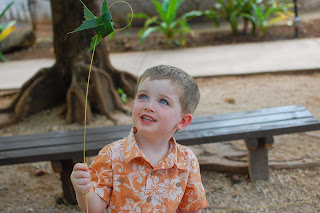 Here's Mason taking a turn at Tolo spear throwing in the Tongan village. 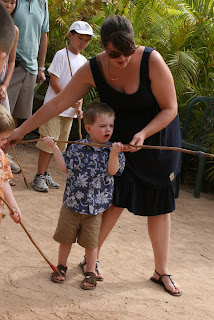 Here is a funny video of Owen while we were on the canoe ride through all of the villages.


Here are the kids learning the "titiorea" (sticks played along to a traditional song) in the Aotearoan village. 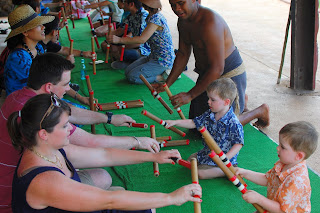 Owen and Mason playing with Poi Balls. They LOVED this and thought that if the ball slung out of their hand, they "WON!!"


We capped the day off with a Luau dinner and an AMAZING show performed by tons of people from all over the Pacific.  The music was great, the dancing was great, the costumes were great!

Here we are after the Luau dinner, getting ready to go to the main show. 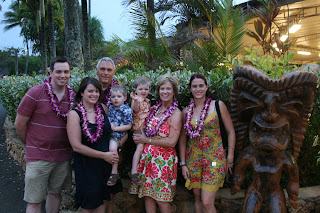 We thought the kids might get tired of everything by the end of a very long day but clearly they enjoyed every minute of it! Here they are helping out the drummers on stage with their new drums.


It was a great day, and the Polynesian culture is so interesting and fun to experience! If you are ever in Oahu, we all recommend the PCC!
Posted by Erin and Aaron at 9:52 PM
Newer Post Older Post Home