After the big pirate bash the weekend before, Owen and Mason's actual birthday came along with Mother's Day. We knew we couldn't let the day go by unnoticed, so we planned something fun for the boys. They got to go to their very first baseball game with Mom and Dad and we even started them an autograph ball! We thought it would be cool to be able to look back and say their parents took them to their first baseball game on their 2nd birthday and have the ball as a special keepsake. The plan is to take the balls back each time we go so they can fight their way through the crowd of other kids for more signatures. 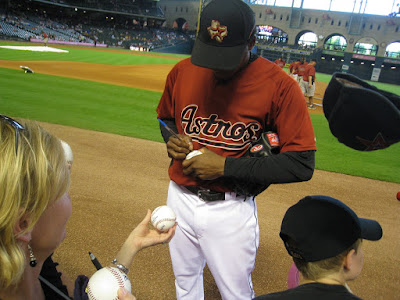 Of course, at two years old, the highlight was the Minute Maid smoothies, the escalators, and the giant baseballs along the curb outside the stadium. They were, however, paying attention when Tejada hit a home run and they clapped along when they heard the crowd. We played in the kid area for a while and Owen tried to beat the giant runner to home plate. He got about half way down and decided he was better off turning back around. We got a funny video of him giving his best shot.


Because I'm a sentimental sap, we each took a picture with them at their birth times...2:03 pm and 2:04 pm. We also spent some time playing on the giant baseballs on our way out. We got some cute pictures but unfortunately, they were SO tired by this point (we skipped nap to go to the game) that not everyone was willing to participate in my 'Mother's day' picture. It still turned out cute but there was NO chance of ditching the pacifiers for the picture. Oh well. 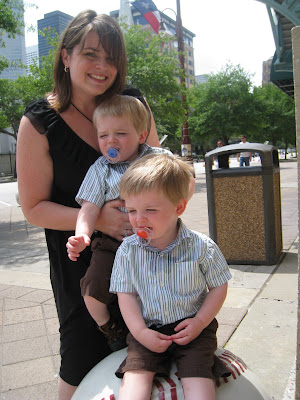 As soon as they hit their carseats they were OUT! 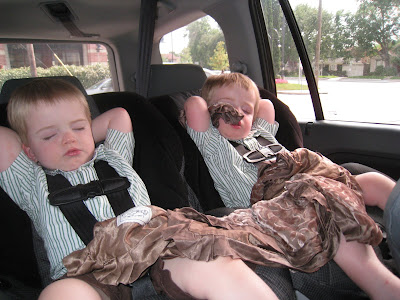 Aaron drove around for a while to let them sleep and then we headed to Hermann park to ride the train. They LOVE this train. There was a long line when we walked up and had to wait for the next train. Owen was SO worried that the train wasn't coming back for him and he couldn't understand we were next. There's a funny little video of this, too.

We got off the train by the playground for a quick play but didn't last too long because we were hot, tired, and it was approaching 6 pm already! We finished our ride back to the station and headed to Amazon for my Mother's Day dinner.

Once we got home, we did presents, took a family picture, and had our birthday cupcakes. It was a long day for everyone but it was so much fun sharing Mother's Day with their birthday. We had a great day with just our little family.


And here are all the pictures from the day: