I have to admit, I was a bit worried about Owen's first trip to the dentist. I can't get him to lay still ANYWHERE when it isn't bedtime, let alone in a strange place. That kid is always moving! I gave him a few pep talks during the day and explained what would happen. The doctor would want to look at the boo boo in his mouth with a little light and he would need to say 'aaahhh.' I told him about laying in a big chair and about getting his picture taken (x-rays, of course). When we got to the office there were toys to play with and to Owen's delight, a train table. While we were waiting for our turn, never fails...a dirty diaper. The nurse sent me into a spare room that had a chaise lounge in it (I know, is this a shrinks office or what?). I laid Owen down and in his brain he thought, 'big chair, lay down, I KNOW WHAT TO DO!' He immediately said 'aaahhh!' Smarty pants.

Once we got to the exam room, we did the x-ray and Dr. Caldwell looked in his mouth. To my great surprise and relief, Owen laid there perfectly still for both the x-ray and the exam. Only one little peep when they made him bite on the strip during the x-ray. He was totally fine with the heavy 'blankie' they put on his body for the x-ray and totally fine with Dr. Caldwell looking around in his mouth. What an awesome little guy. Knowing Owen, his usual reaction would be to cry and cling to Mommy. I guess he knew this was pretty important and Mommy really needed him to cooperate so she could stop freaking out over the whole situation.

Dr. Caldwell was surprised at how good his gums were healing already. The x-ray confirmed that the entire tooth did come out which meant no digging around up there and no sedation. Although we were fairly confident going in that his entire tooth did come out, we went ahead and left Mason with our neighbors just in case some minor surgery was needed. The x-ray also showed no damage to the bone and no affect on the neighboring teeth. What a relief! Dr. Caldwell showed us an example of the kiddie partial that Owen would get when the time is right. He explained that it is usually bonded to the back set of molars and that kids do great with them. Since Owen has only one of the back molars, we can wait until the other one comes in (in about 6 months) or we can bond it to the front set of molars right away. Of course, you know which option I'm going for! The downfall of the front set of molars is, since they are further forward in the mouth, the potential to see some silver when he smiles is greater. Luckily, it is an option to move it to the back molars once they are in. He needs about a week to heal and then he'd be ready for his kiddie partial, which would take two weeks to make. Currently we are in holding mode while we wait on answers from the insurance company. Normally they cover this type of thing 100% because it acts like a spacer, preventing the gap to close. Apparently front teeth don't shift and therefore, don't need a spacer. We are currently waiting to see if a kiddie partial for "tooth F" qualifies as preventative. And of course, since kids don't need cleanings until they are 3, we don't have either of them on our policy. Ouch. The partial is about $500 so if they won't pay for it, we'll for sure get it done right away out of pocket. I'm sure I can scrounge up $500 from somewhere. Anyone want to buy a double stroller? Or two or three? We have a few!

Owen's will be similar to this one. The only difference is that this one replaces two of the front teeth, where as Owen only needs one. 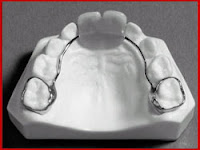 So after all of this rigmarole, Owen got to pick out of the toy chest! The first thing he spotted, he grabbed. It was this bright green, plastic piggy bank. He totally ignored me as I was rummaging through the toys trying to show him his other options. Instead, he grabbed ANOTHER bright green, plastic piggy bank...and said, "it's Mason's." (Pause to wipe tear).
My sweet little guy had just performed beautifully for this strange man he'd never met, and the only thing he could think of was his brother, who wasn't even with us. He finally settled on two little race cars, exactly the same. And when we got back to the neighbor's house, Owen ran in and excitedly showed Mason what he brought him. The neighbor couldn't say enough nice things about Mason and how sweet he was. I have to say that at the end of the day I was one proud Mommy. I sure have some amazing little boys.

Our outlook is great, Owen is completely back to normal, and Mom and Dad have calmed down since Monday evening. Thanks to everyone for your kind and encouraging words. We really appreciate it!
Posted by Erin at 1:02 AM
Newer Post Older Post Home