If you know me, you know how deathly afraid of tornadoes I am. Thankfully this fear has not reared it's ugly head in quite some time. We used to live in Oklahoma and every night during spring and summer I would be terrified. Being in Houston, the severe storms are much more subdued. Until, that is, Saturday night. We were at Paige and Blake's house when Blake's mom called and said "oh, there's a tornado in Pearland heading for Friendswood right now." No one else was worried. This was the first time I have had to deal with this situation since having kids. I was having a hard time because my brain was telling me to be brave so the kids wouldn't freak out (I will have to work on this as they get older and know what is going on) yet my fear was taking over. Paige, being the good friend she is, decided that if it would make me feel better we would all sit in the hall with a mattress. So that is what we did. And I was able to relax and "act" brave on the outside. She brought us Coke Zero (which we spilled), pretzels and sippies for the babies, and Blake even hooked up the 'ol rabbit ears so we could keep an eye on things. Also being the good friend she is, she made sure to document Owen and Mason's first tornado warning. Classic. 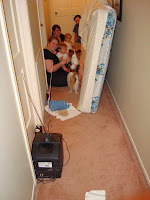 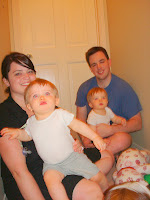 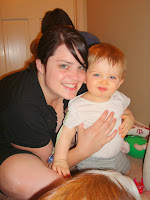 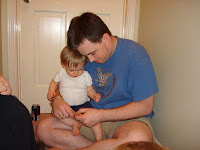