Sort of!  Aaron was selected by his company to receive sponsorship to get his Executive MBA!  Some companies allow any employee an allotment to obtain a Master's degree, and this is sort of true with his company.  This year a new benefit was added that pays for a small portion of the tuition.  However, the 85K I'm referring to does not come easily!  And because Aaron's company is so big, the prospect of being one of the three lucky "winners" was kind of against us!  First you have to be nominated by your superior...or in Aaron's case...your superior's superior's superior!  (We are very grateful to him and anyone else who decided that Aaron's name be put in the hat for consideration)!  After nomination, you have to write an essay stating why you would be a good candidate and how you would use the degree to further your career.  A committee narrows down the essays to about 8-ish people who then come in for an interview.  (I'm glad it wasn't me in that interview...a panel interview with a bunch of VPs from different areas of the company - IT, Marketing, Accounting, etc.  I would have choked!)  This year Aaron was one of the lucky 3 that were selected to return to school!  We are so proud of him because he SO deserves it!  Fortunately, through all of his soul-searching over the last 3 years, an MBA really does make sense for what he wants to do professionally.  He will start in the fall and the program will last for two years.  Not an easy feat, but one I'm sure he will handle it just fine!

The kids and I were so happy that they "picked Daddy" that we had to do a little celebrating for him!  We had some stuff ready for him when he came home from work that day!

The kids made a banner for him and wanted it hung in clear view from the front door.  Mason wrote the blue letters, Owen wrote the red letters.  Then they each added some special drawings.  (Owen is in yellow) 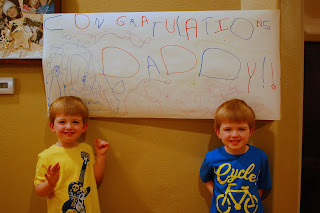 Then we patiently waited by the window (the room was pitch black but the flash makes it look lit) and watched for Daddy's car.  They really wanted to be standing on their chairs under the banner to shout "CONGRATULATIONS DADDY" when he came through the door.  They were SO excited! 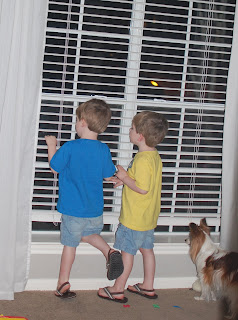 Here's Daddy coming in the door to his surprise!
We also got Daddy a cookie cake, which the kids could hardly wait to eat until after dinner (which we celebrated at Grimaldi's Pizza...YUM)!  Red and blue icing of course... 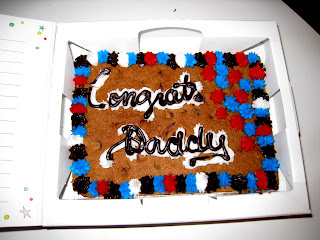 Here is a proud Daddy and two proud little boys!  I don't think the kids know what Daddy "won" but they were sure proud of their sign, their cake, and the card they picked out. 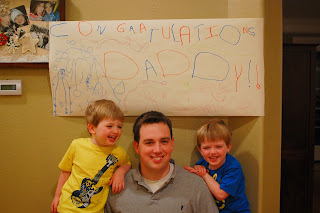 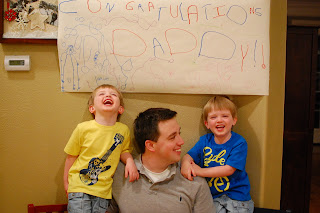 Here are the kids giving Daddy his card.  We just so happened to find a "We Will Rock You" card...which just so happens to be one of their favorite "rock and roll" songs right now.  (They really like the "boom-boom-clap" action, and you can catch Owen doing it at the end of the video).
Posted by Erin and Aaron at 11:16 PM
Newer Post Older Post Home