We were super-duper busy this year despite the decision not to host Christmas at our house for the first time since the kids have been born.  It certainly seemed, at first, that we had all the time in the world to get everything done and then poof!  There was no time left at all!

We managed to pack in lots of activities and silliness around here.

Santa sent an email to Mommy for Owen and Mason. He tells each kid that he knows they've been good and opens his big Santa book to the "Owen" and "Mason" pages. There are pictures of the kids and even a picture of the bicycle they previously told Santa about when they visited him. Mason intently watched his video while Owen, after seeing a picture of the exact bike he had been asking for, gave a priceless reaction. Here it is...


This was the first Christmas that the kids were able to form their own list and actually ask for things they wanted.  Aaron and I got such a kick out of their little lists and seeing how much they really wanted some of the things that were on them.  The anxious waiting was building in them which made it fun for us.  Needless to say, we were quite excited for Christmas morning to arrive so they could see all their gifts.  After Mason watched his Santa video I asked him what he wanted for Christmas. Here is his list...

In case you couldn't understand him, here's what he said...
Helmet
Bicycle
Crashing thing (Criss Cross Crash)
A puppy, clarified as "my big little puppy" meaning a big one that matches the little one he already has
Criss Cross Crash thing
Circle thing that goes in a loop and in a circle (a racetrack that has a loop-de-loop)

And here is Owen's list. Lucky for Santa, they are quite similar!

In case you have no idea what Owen's talking about, here is what he said:
Bicycle
Helmet
Pumper (bicycle pump)
Candy Cane
Driving upside down thing (same racetrack Mason referred to)


Here is a video of Mason dancing along with a singing puppy dog while Owen is playing in his own little world. So cute!


A huge hit in our house during the holidays are the little musical buttons that Hallmark sells (or used to sell). We've got one that sings Jingle Bell Rock, which is just as loved as this one...


Mason is digging into the box of ornaments because he's tired of waiting on Mommy to get started! 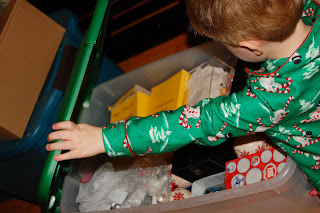 Decorating the tree together and creating memories and family traditions. (M, O) 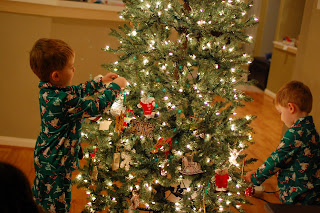 Owen was the "topper" man...which meant he put the tree topper on. 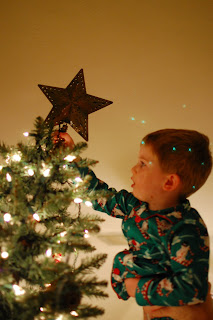 Mason was the "plugger"...the man who plugs in the tree topper.  Everybody has a job! 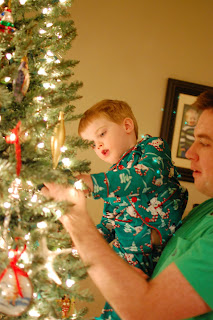 We have a Christmas train that was a gift from Numna on the boys' first Christmas. Every year they look forward to getting it out and watching it drive around the track. This year they were especially interested in the carols the train was playing. The morning after we decorated the tree, the very first request of the day was to listen to the music. So this is where they sat for quite some time, humming, singing, and making up their own words to the parts they didn't know. Eventually Mason went on to do something else, but Owen sat here for an hour and a half nodding his head to the music and singing along. His only breaks were to go potty and to get his milk and waffle and carry it over to the train to eat breakfast. The video can get a little repetitive since all that is happening is a train driving in a circle (well, that and some really cute kids singing), but I went ahead and posted this video because I know certain members in my family would really love to see it.

We went to check out some Christmas lights and ride a little train.  The wait was pretty long but their faces in this pic let me know they made the best of it! 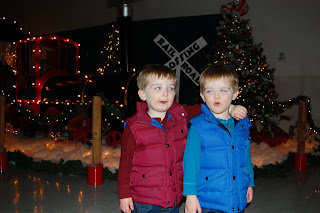 Here's the unofficial Santa picture that Daddy took.  The real one has everyone looking at the same camera but of course, that one's not digital. 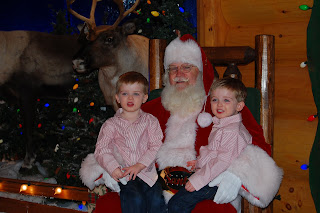 Here are the rest of the pictures from our holiday fun!