I picked the boys up from school today and the teacher gave me this recount of her conversation with Owen.

Owen: I have poo-poo
Teacher: Poo-poo again?! *begins changing diaper* Where'd you get all that poo-poo from?
Owen: From the poop store!
Teacher: Ohhh! Well, where'd you get this hiney? At the hiney store?
Owen: *with all certainty* No. At the bottom store.

After nap the other day I forgot to change Owen's diaper. He was playing in just his t-shirt and he finally came to me and said, in a very concerned yet sweet voice, "my diaper is swinging, Mommy." He then spread his legs and showed me how it moved. I was cracking up!

Mason has become quite the little conversationalist lately. When he is trying to tell you something that he's not quite sure about he kind of stutters while he's trying to form his thoughts. But when he is absolutely sure about something, he will tell you all about it like it's fact, while giving these little "yes" nods with his head and really gesturing with his little hand. It is the cutest darn thing when he does it because he is so sure of himself. Writing about how cute it is doesn't do it justice. I really must capture this on video!!

When either of them see something funny, out of place, or just plain confusing, they'll say (for examples sake, take the kid-sized bench we saw), "look at that bench! what'd that happen?!" Obviously they mean, "how'd that happen" but it's just funny that they come up with these ways of expressing themselves.

They still play with "Mine" (their talking hand) but now it has morphed into many, many Mines. They are constantly trying to configure their hand or tangle their fingers in funny ways and then show us what they did. They even ask us what kind of Mine it is because they want us to name it. Like I posted earlier in January, we have Mine, Mommy Mine, and Baby Mine...we now also have Bug Mine (thanks to Aunt Lindsay), and Bunny Mine (pointer and middle fingers up, ring and pinky making a mouth with thumb). All the other crazy "Mines" don't have names yet. I was reading that having an elaborate imaginary friend can be a sign of a GT kid, so Owen and Mason...keep that imagination going!! 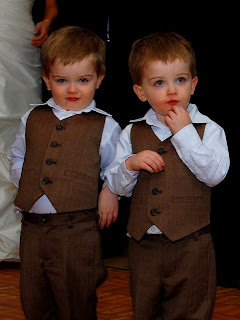