The School For Little Children 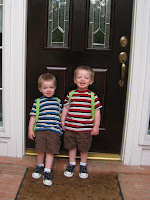 Here we are getting ready to leave for school! (M,O)

About to go inside! We're getting excited!


Owen and Mason started their new Mother's Day Out this week. They go Mondays and Wednesdays from 9-2. On Monday they were excited to go and didn't cry when we left. I called to check on them later in the day and the report was that Mason would get a bit weepy during transition times. I was extremely curious to see how nap time would go for several reasons. One, because nap time at my house lately has been a struggle with their new found freedom in a toddler bed. Two, the info sheet we got during meet the teacher said to leave pacifiers at home. Owen and Mason have never gone to sleep without it, much less in a strange place filled with toys and lots of other kids. I went to pick them up and those little boogers were out cold! Apparently the teacher had to move Mason's mat next to Owen's because he wouldn't lay down. Once she did that, they both went to sleep! SHOCKED! 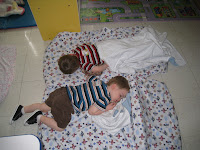 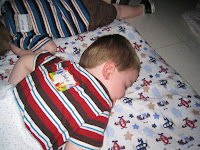 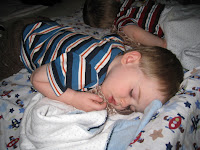 Here's proof that we slept!

Let me just say that just two days in school have helped tremendously at home during nap and bed time!


Owen and Mason's new (bigger) backpacks came in the mail a little too late for the first day of school, but it was a nice treat later that night. Owen very adamantly picked out a red backpack and Mason wanted blue. 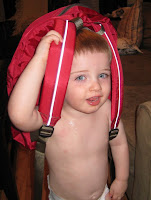 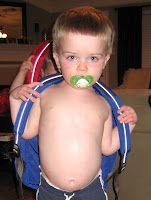 Day two was expected to be a little more difficult since they now knew the deal. Of course, Mason started crying before I even left the room and Owen was crying by the time I peeked back in the window, 10 seconds after leaving. Oh boy. I called to check again and the report was no tears after about 15 minutes. When I went to pick them up, both Owen and Mason were out cold again, sans pacifiers! This time, Mason was in his official nap spot, away from Owen. The teacher said it was like night and day from Monday. But both days, for whatever reason, both kids fell apart when I woke them up to tell them I'm back to pick them up. They both want to be held and and are making sure everyone knows it. Who knows!

Here we are in our cool new backpacks and lunch boxes on the second day of school. Today we got to wear our cute "School for Little Children" shirts too!

Cute little Owen looks like he is sick of waiting on us to quit taking pictures!
Posted by Erin at 11:52 PM
Newer Post Older Post Home