The kids are REALLY into drawing maps these days.  I think they think they are pirates and are going to find a treasure!  They like to draw it and then roll it up, carry it around for days, and consult it to see which way they need to go.  Most of their maps consist of some squiggly lines and an occasional "X marks the spot."

So of course, I recently bought them a book about maps that starts off in a kids room (a map of the room) and essentially backs out to a map of the house, then the street, then the town, all the way to a map of the solar system.  This inspired them to draw the following...pretty good if you ask me!


Here is Mason's map.  You can tell because he labeled it at the top, sounding out the word "map."  He then drew some buildings and labeled them with the first initial.  W = Which Wich or Wal Mart (not sure).  CH = Chuck E. Cheese, of course!  And my personal favorite...he sounded out "our house" and wrote "R HOWS." 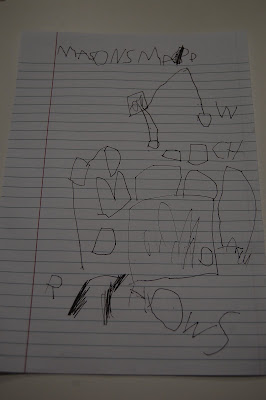 Here is Owen's map, as you can see at the bottom.  His map is mostly the roads to the particular destinations.  He even discussed as he was drawing his many roads how we could take "this road or this road or this road if there was construction."  H = house, W = Wal Mart, and my favorite...his best sound-out of Target.  TORGIT!  (Yes, the 'a' in Target sounds like a short 'o' come to think of it!) 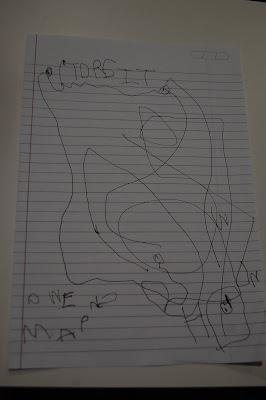 I was quite proud of them for the detail they included.  (Lots of explanation went on during the drawing phase...wish I had it on video).  Good thing I took a picture of these great maps, because what did they do?  Immediately roll them up and cart them around...and now...who knows where they've ended up!
Posted by Erin and Aaron at 12:51 AM
Newer Post Older Post Home