The kids have had an important past few days - learning to use the potty and starting preschool. The official first day of school was 2 weeks ago but we were out of town and then, despite my hopes of starting last Wednesday (the day after we got back from Hawaii), they were simply too jet lagged to start. We didn't get back on a good schedule until Sunday. We used the weekend to really get good at going potty, making them go naked practically the whole time. They did pretty good, not too many "leaks" as they say, and Owen even took himself to the potty to do his business (for a lollipop). Mason is notorious for having a harder time in that area and it wasn't until Sunday that he got his lollipop! And when it was time he ran to the potty on his own. He was pretty bummed out on Saturday that it hadn't happened for him yet, even saying "Owen is doing good" after Owen got 3 lollipops to Mason's none. After spending most of the weekend with a naked bottom, they were finally doing well enough for a little Risky Business action.  Here's Owen: 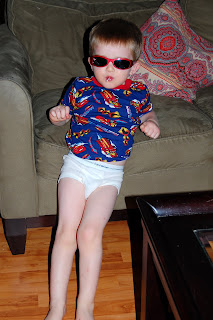 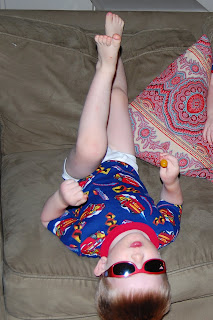 Monday morning was their first day of school. We have been so busy lately that it snuck up on us (even though we were two weeks late in starting). I didn't really talk a lot about it prior to them starting and we missed meet the teacher, so I was fully expecting a rough morning. Before we left the house, it was looking grim as far as Mason making it to school. He had a meltdown over his shoes and then wouldn't sit on the potty. I don't have enough trust yet that they can make a 20 minute car ride so it was very important for him to take his morning pee! It was quite a battle and Owen and I had to pretend we were leaving for school several times before he realized he didn't want to be left behind. 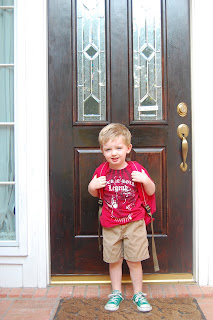 Luckily Mason let me get the obligatory picture on the front porch. 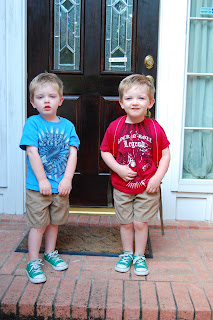 And for posterity, here is one from last year. 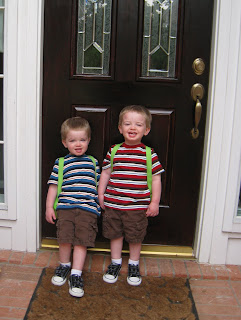 He finally peed and got his clothes on. And we did make it all the way to school clean and dry. Happily, Owen and Mason went right in and got to work and when I hugged them good-bye there were no tears. I sent a bunch of extra clothes because I wasn't confident that they would tell the teacher that they had to go potty. At home they pretty much just take themselves to the potty. They aren't very experienced on what to do when they don't know where the potty is. But, when I picked them up they were both still in the same shorts they arrived in! YAY!! No accidents! 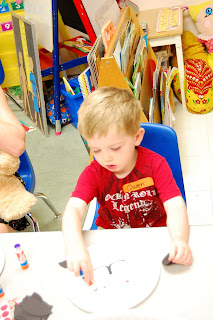 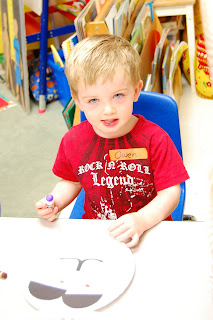 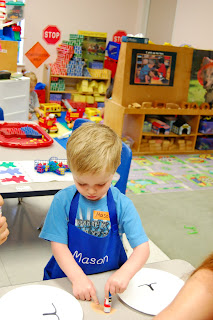 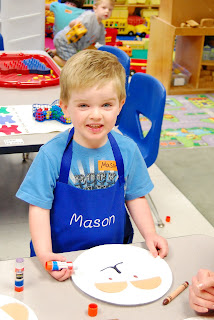