And my birthday present was...

Aaron and family let me sleep in for my birthday. I only missed out on about an hour of the morning routine when Aaron busted into our room shouting, "Get up! Owen busted his chin open and he needs stitches. I'm gonna need your help!" Talk about a surprise! I'm trying to wake up and make sense of the goings on by asking what happened...what did he hit...etc. Aaron kept saying, 'Just get up, I need your help,' all the while holding a sobbing and bleeding boy.

We hurried off to the ER and sure enough, the little guy needed six stitches. Apparently he was playing with his tricycle in the living room, standing on the platform between the front wheels while holding on to the handle bars. Keep in mind, this 'platform' is only a few inches off the ground. I saw Mason do this 'trick' a few days ago and didn't think much of it. After all, he wasn't standing on the seat! I guess the way Owen leaned made the trike tip forward and pitched him over the handle bars. Thankfully, all he hit was the floor, nothing sharp. It could have been a lot worse. As it stands, his cut is about an inch long, and before it was sewn together, one might describe it as 'gaping.' I stomached it just fine, but my sister had to go lay down. Aaron did pretty good too, thankfully. He took charge of the situation and was delegating tasks to my mom, like get the diaper bag ready, get a change of clothes (since we didn't take time to get him out of his bloody pjs), get a syringe ready with Tylenol.

At the ER, the little guy had to be pinned down by three people. The nurse was at his head keeping it still. Better him (yes, a male nurse) than me. Aaron and I were in charge of his lower half. Poor Owen was so scared from being pinned down that among all the crying, he managed to cry out 'Owen, Owen...,' which is what he thinks Mason's name is (they both call each other Owen). Poor baby wanted his brother for comfort, who was at home with the grandparents, aunt, and 'greats.' Thankfully this happened while we had someone to watch Mason.

A hundred bucks and a grape sucker later, Owen was good as new. I have a feeling this isn't our first trip to get stitches. Our odds are pretty high with two boys.

Here is a pic we took after Owen went to bed... 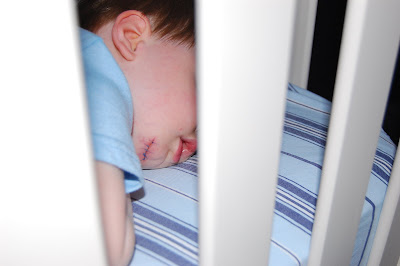